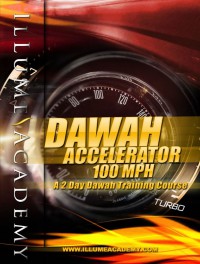 You are a Muslim!

Alhamdulillaah! You are in one of two situations - You have either accepted Islaam or you were born as a Muslim. If the latter is the case, then some of your ancestors accepted Islaam at some point of time. How did they accept Islaam? Were they doing nothing about Islaam or did they work towards it? Either way, someone definitely worked hard to pass the message of Islaam to them. Who was that someone? An ordinary Man or a Companion of the Prophet? From which part of the world did he come? What language did he speak in? Whatever the case, he was one among those Millions who received the Message of Islaam from the Prophet. So how many people passed the message of Islaam this way? Millions... Billions... or Trillions? The fact still remains that You are a Muslim because some Muslim did his job of giving Da'wah!

Don't you want this to happen to your fellow non-Muslim friends?Are you going to leave them when you know their destination is hell if they don't accept Islaam? Your answer would be "NO!"

This course is for those...

What you will get in this course

What is 'Sooo' special about this course?