Until They Change Themselves 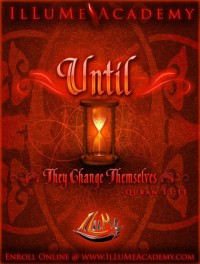 The impact that ISLAAM had on desert dwellers of Arabia 1430 years ago is evident even today by the legacy they left behind, no civilization in the world underwent such transformation as underwent by the Quranic generation!

Muslims were pioneers in humanity, equality, generosity, sincerity and Justice. The Glorious Qur'an transformed ordinary desert Bedouins into the best of mankind, the heirs of so brilliant and magnificent civilization world has ever witnessed and those who followed them in goodness were brilliant in every aspect.

But, today it's a different picture altogether

Muslim community is in such a mess, an indescribable mess, from best of people, they have become the worst; our legacy simply became a history of the past.

If ISLAAM is the true religion of Allaah then why the Muslims are in such a bad situation?

What need to be CHANGED to get back the help of Allaah?

What need to be CHANGED to get back the lost honour and dignity?

What need to be CHANGED to spread peace and tranquility?

What need to be CHANGED to get beck on the path of victorious?