The Road to be Taken 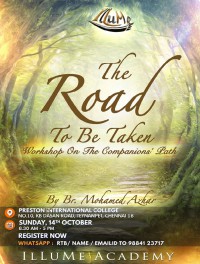 "As the title suggests, this workshop will shed light on the road to be taken to attain success in this life and hereafter. This road is not a new one but was taken by the Companions and the great scholars who followed them.

Allaah says in the Qur'aan

"And the first to embrace Islam of the Muhajirun and the Ansar and those who followed them exactly (in faith)! Allah is well-pleased with them as they are well-pleased with Him. He has prepared for them Gardens under which rivers flow (Paradise) to dwell therein forever. That is the supreme success." Al-Qur'an 9:100

In addition, Prophet (ﷺ) told us about the special place and superiority of the first three generations

Therefore, we should look to the Companions and the others of the first three generations, those who followed in their footsteps and who learned directly from them and we should try to emulate them as we know that their lives were pleasing to Allah

It is inconceivable that we call ourselves followers of those pious people, yet we have no idea how these people understood the Quran and the Sunnah."