The Rise of E-Man 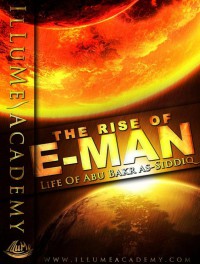 The Prophet(s) said, "the sun never rose nor set on anyone better than Abu Bakr except prophets"

This seminar will shed some light on the life of Abu Bakr(ra):

Allaah has promised, to those among you who believe and work righteous deeds, that He will, of a surety, grant them in the land, inheritance (of power), as He granted it to those before them; that He will establish in authority their religion - the one which He has chosen for them; and that He will change (their state), after the fear in which they (lived), to one of security and peace: 'They will worship Me (alone) and not associate aught with Me. 'If any do reject Faith after this, they are rebellious and wicked. [An Noor:55]

All in just 27 months. For others it is taking part that matters. But FOR HIM IT IS THE TAKING APART.

Success is NOT measured by what one accomplishes, but by the opposition he has encountered, courage with which he has maintained the struggle against overwhelming odds. HE WAS SUCCESSFUL.

Come and learn history of Abu Bakr(ra) How he is able to achieve what others dare to dream. History is introduction to stupendous people we can't meet in our restricted lives; lets not neglect the opportunity.