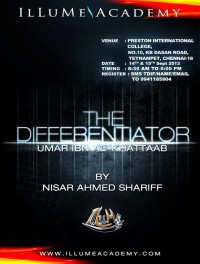 Imagine if 'Umar(ra) is ruling the world today

The world would be different

However, 'Umar(ra) is not going to be back

But you can bring back 'Umar(ra) in your life

Transform yourself and create a world of difference

What you would get?

Hurry to book your place to witness the amazing journey through the life and times of 'Ameer al-Mu’mineen al-Farooq 'Umar ibn al-Khattaab(ra).