From the Leader's Diary 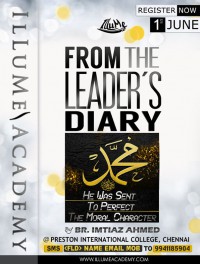 He taught people to spread peaceful words
Unfortunately, today, people associate him with the sword
Though the greatest of prophets he was humble
A quality which made him truly remarkable

His tongue never hurt anyone nor did his hands
Rather he was forbearing when he was tortured in his land.
When he conquered Makkah he did not spill blood
Even the enemies told "we have known from you only good"
The most beloved of all creation
Was also the humblest to walk the earth
A life overflowing with examples
Right from the events that surround his birth
Although towards his enemies he was known to be fearless
He was a bringer of compassion, patience and selflessness
He possessed speech most balanced- free from desire
Cautioning mankind about a fire:
Whose fuel of men and stones never tires

Young and old competed for his favor
A friend to the needy, orphan and wayfarer
He would mend his clothes and milk his goats
He was an emperor who helped with household chores
Although a Prophet, he strived and endeavoured
He was the best of mankind,
Beloved of all thr creation…
Muhammad (saw),
Was a mercy to all nations