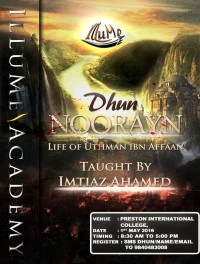 Prophet(saw) said in an authentic hadeeth that stars are guidance on the sky and he is a guide to his companions and companions are a guide to his ummah, and we believe that the Prophet, peace be upon him, has rightly guided successors who carried out his Sunnah in spreading knowledge calling to Islaam, and managing the Muslims' affairs, amongst those stars is Uthmaan ibn Affan(ra), who was the third rightly guided caliph of this ummah.

Lets learn from his nobility, modesty, selflessness, generosity, truthfulness and steadfastness, being and excellent Muslim, with all high virtues required to be the best, apart from being a scholar, a haafidh, he showed his tremendous leadership qualities when he took over the succession from the two Shaykhs, Abu Bakr(ra) and Umar(ra), fulfilling this amanaah with utmost care under the guidance of Qur'aan and Sunnah.

Prophet(saw) prophesized during his lifetime the calamity which will befall on him and guided him how to face it. Uthmaan ibn Affan(saw) stuck to the guidance till his blood was spilled. The noble man who refused to kill his defectors, in spite they wanted him dead, only for the noble reason, not to spill the blood of a Muslim and break the unity of the ummah...

Come learn about our real hero, who has no match, their life story will rejuvenate our eemaan.